Will Broncos outside linebacker Bradley Chubb be ready for opener? “No doubt” 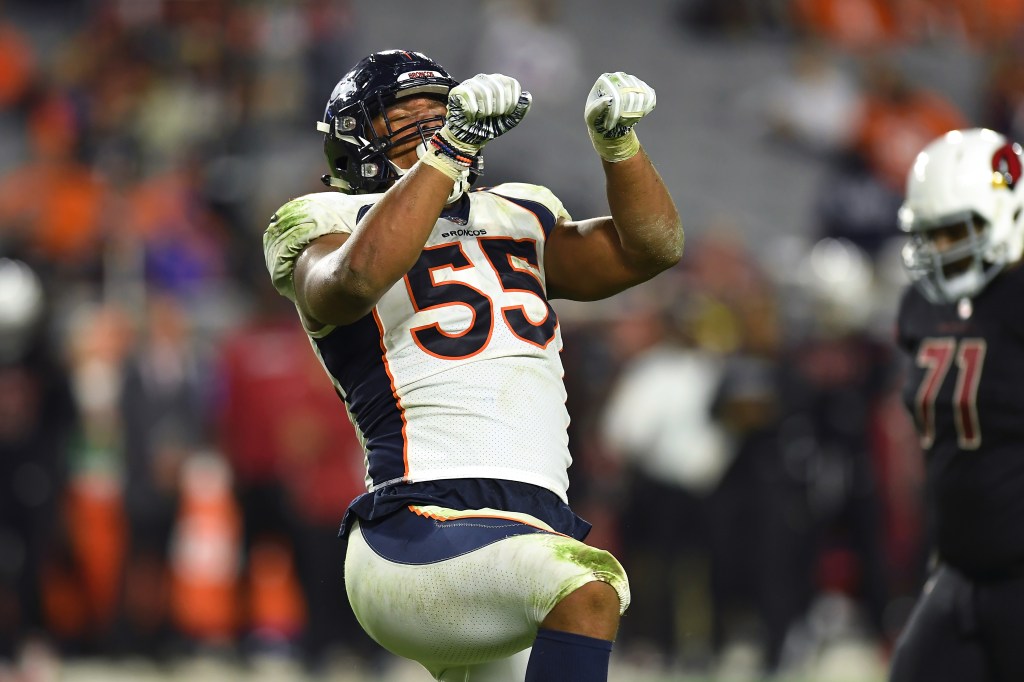 “Yeah, no doubt, I feel like I’ll be ready to go,” Chubb said during a video conference Friday.

When the Broncos host Tennessee, it will be 16 days short of one year since Chubb tore his left ACL in a loss to Jacksonville.

The Broncos’ best player at the time of his injury, Chubb’s departure doomed the pass rush and allowed teams to pay additional attention to Von Miller, who had only eight sacks.

Chubb says he will be ready to face the Titans, but his activity will be managed during camp.

“We’re going to play it smart and just try and work back into it because, right now, I haven’t been doing anything physical like going against an offensive lineman,” said Chubb, who will wear a knee brace. “I feel like with my health, that’s going to be the next step for me, getting that whole confidence thing back and I feel like as we get into the flow of things, I’ll be good.”

Great was Chubb’s rookie year, when he had 12 sacks. Great was going to be last year, too. But then came the injury.

There is little doubt Chubb can regain his 2018 form once he gets his figurative football cleats under him.

“I feel like this is a very what-have-you-done-for-me-(lately) league,” he said. “My rookie year — that’s two years ago now. I have to come back with the same hunger I had, the same ‘dog’ mentality and just go out and prove everybody right or wrong. If they’re writing I won’t be the same, proving them wrong. Or if they expect great things from me, proving them right.

Chubb was able to take care of his rehabilitation at the Broncos’ facility. The only exception to the league shutdown was allowing players recovering from 2019 injures to continue supervised sessions.

Beginning in mid-March, the facility was empty save for security personnel, Chubb, tight end Austin Fort, head trainer Vince Garcia and assistant trainer Paul Burant. No coaches. No players. No front-office executives. Nobody else.

“We were competing against each other every day and that tight-knit group helped,” Chubb said.

Fort tore his ACL in a Broncos preseason game at Seattle last August.

“It was extremely weird because there was just a small handful of us there,” Fort said in a recent interview. “We had no other choice but to come in and work every day and enjoy the small company we had. Especially with Chubb going through the same rehab as me, we supported each other.”

Chubb tore his left ACL in high school (seven years to the day before he was injured against the Jaguars) so he had a road map to use as a reference — the ups, the downs, the willingness to accept support from others for support, etc. — during this rehabilitation.

“I would say it was probably the same, honestly,” he said. “I was locked in and had my family close and people in my circle really close to me and leaning on them whenever I needed to.”

Ironically, Chubb said the shutdown was a semi-blessing because he didn’t have to stand on the sidelines and watch the organized team activity workouts.

“With everything getting shut down, it actually allowed me to stay focused because I didn’t feel like I was missing anything and feeling like, ‘Oh, man, I could be doing this (football activities), but I’m rehabbing, blah, blah, blah.’ I got into a routine and it made me hungrier and ready to go.”

Lock’s race to opener. Quarterback Drew Lock also had a video conference (his first since May 5) and acknowledged the challenge of getting to the opener and clicking at some kind of level.

“Yes, we didn’t get enough time with each other and we’ll have a shortened period of time when we’ll have to pick up a lot of things extremely quickly and it may not be the prettiest at first,” he said. “But our job is to make the mistake, learn from it and try not to make that mistake more than once because you don’t have time to make the same mistakes.”

Lock saluted the Broncos’ logistical staff for preparing the facility with safety measures and protocols.

“Everybody is on their ‘A’ game, without a doubt,” he said. “It’s gotten to the point, even though there are so many people in this building, you feel safer knowing you’re in here. … Our No. 1 goal is keep everybody safe and healthy and I think the Broncos’ organization is doing a great job at that.”