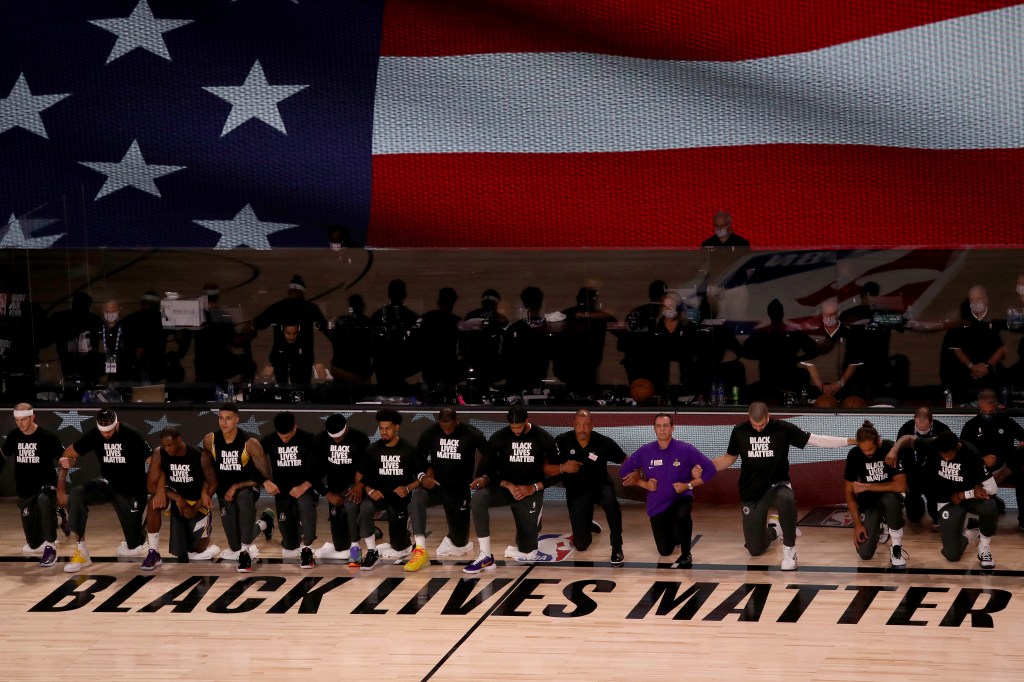 For NBA players stuck in the Orlando bubble, Thursday’s slate of opening games may as well have been the first day of school.

“I got excited, man,” Nuggets veteran Paul Millsap said after practice Friday. “I got excited watching the games.”

From the comfort of his Gran Destino hotel room, Millsap saw Utah stave off New Orleans and then watched as the Lakers staked their superiority over the Clippers. Not that anyone’s counting yet, but both results could end up helping the Nuggets, whose re-start tips off at 11 a.m. Saturday against Miami. They’ll begin their trek just one game back of the No. 2 seed Clippers.

As the focus slowly turns to basketball, Millsap and the NBA at large were quickly reminded of their larger purpose in Orlando. All four teams playing Thursday knelt during the national anthem, with their arms locked, alongside a court emblazoned with the statement “Black Lives Matter.”

The @PelicansNBA & @utahjazz kneel for the National Anthem ahead of the NBA restart. pic.twitter.com/TCFolP06HM

It was a profound moment for the NBA and a fitting way to jumpstart the season amid so much social unrest.

“I thought it was a great moment, not only for ourselves but for the country,” Millsap said. “I think that signified what our purpose is down here. It’s not only just to go and try to win a championship but raise awareness and actually do something about what’s going on in our society.”

Millsap didn’t say directly whether the Nuggets would do something similar, but another player told The Post this week that “we’re definitely doing something as a whole, as an NBA.” Presumably, Thursday’s moments weren’t singular to the opening games.

Spoke with a player yest., who said this when I asked about protests: “We’re definitely doing something as a whole, as an NBA. Not making anybody do anything, but if guys want to do it, they definitely can. If other guys don’t, just be ready to talk and give your reason why not.” https://t.co/sMCPvTJxtv

The 35-year-old was almost giddy talking about Denver’s chances and the potential he sees for the Nuggets. He lauded Nikola Jokic’s physical preparation and mentioned the tone that Jamal Murray had set from the outset. At 43-22, the Nuggets are comfortably in the playoffs. Their injury situation could grant them an excuse to ease into the eight seeding games, but Millsap said that’s not an option.

“We have to take every game serious,” he said. “And when I say serious, I mean doing the right things, practicing good habits. … We’re going to take these game serious.”

The Nuggets were so shorthanded for the majority of the three scrimmages that it was almost unfair to make concrete deductions. With that said, turnovers, 3-point defense, transition defense and communication will all be emphasized as they get their roster whole again. The early seeding games (Miami, Oklahoma City, San Antonio) should act as their original scrimmages, serving as a workshop to fine-tune their operation.

And yet for all the team’s moving parts — their injuries, their unknown rotations, their potentially problematic depth — Millsap said his criteria for a future champion isn’t complicated.

“It’s pretty simple to me,” he said. “The teams that take these things serious. The team that wants to be here, I think that’s a big thing. Wanting to be here, wanting to win. Not caring about the situation or the circumstances but planning to be here for the long haul. I think that’s the championship team that’s going to come out. Whatever team can lock in and keep their focus throughout that time and who’s prepared to stay for the longest, is going to be the champion.”

In essence, it doesn’t matter if it’s a bubble or a beach.