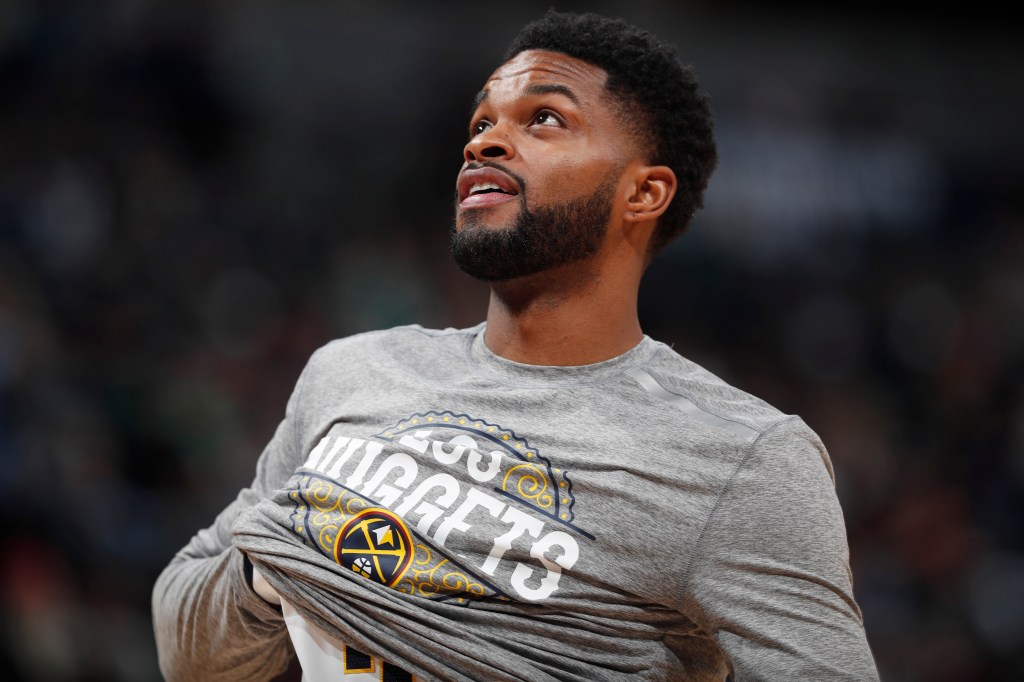 Nuggets guard Troy Daniels didn’t mince words. He called it one of the hardest decisions of his life.

Anthony Davis had personally recruited him to the Lakers before this season started. LeBron James had affectionately given him the nickname “layup” because his 3-pointers were equally as reliable. He had been on the team’s airplane when they learned of Kobe Bryant’s tragic death and saw the layers of fog that shrouded Los Angeles that dark morning in January. He was part of the connective tissue of the Lakers, an asset to the team’s stars.

On his sixth team in his seventh season in the NBA, Daniels craved the chance to get out of the first round of the playoffs, something he’d never done. Had he stayed with the Lakers, that benchmark was almost assured.

But Daniels had heard the Lakers were considering other options with his roster spot, and there were no guarantees he’d be with the team after March 1. If the Lakers moved on from Daniels after that date, he wouldn’t have been eligible to play on a playoff team. So the Lakers did what was best for Daniels; they agreed to waive him.

“Everybody, I don’t care what they say, they dream about playing on that type of platform in that type of city,” Daniels told The Post, noting that he chose the Lakers over several other suitors. “So that was very tough for me to know that they might not want you, or the whole little case of we’re working out guys behind your back and stuff like that. So that kind of hurt. But to know that I was still wanted by other teams was a blessing. I looked at it as another opportunity to do what I do best.”

According to Daniels, who averaged 25 points and drained 11 3-pointers over Denver’s first two scrimmages in the Orlando “bubble,” the Nuggets had been trying to get him for a few years. He signed with them in early March and played just one game before the pandemic hit.

“Early in my years, my agent used to tell me, he said it’s always good to be wanted,” Daniels said. “It’s good to feel wanted, and I want to be where I’m wanted.”

It makes sense. As a team, the Nuggets were average from 3-point range the past two seasons, and their percentage dropped to just 34.4% during last year’s playoffs. Not to mention, by trading their streakiest shooter, Malik Beasley, to Minnesota in February, they lacked any discernible depth at shooting guard.

Nuggets coach Michael Malone has been impressed with Daniels but wouldn’t commit to any minutes once the meaningful games start. All accounts from Orlando are that he’s been torching the nets during practices. If nothing else, there’s a place for him given that injuries and late arrivals to the “bubble” have hampered the team’s re-start.

Like any player the Nuggets acquire, Daniels had to fit within Denver’s carefully cultivated locker room. Personalities, experience and leadership all factor into the Nuggets’ decision making. It doesn’t take long talking to Daniels before it’s clear his traits mesh well with any franchise, let alone a young team on the rise. He’s gregarious and personable, both obvious from his personal vlog he’s filmed down in Orlando.

“You can ask anybody,” he said. “I’m an outgoing person, a dope personality. I’m not scared to talk. I’m not afraid to have a conversation. I’m not afraid to talk to the GM or the owner. They’re still people, just like we are, so at the end of the day, I think that carries weight as well as being an unbelievable shooter in the NBA.”

“While we’re on the phone, I demand justice for Breonna Taylor’s killers,” he said. “I want that to be known. … Even in the players’ meeting that we had, that’s one of the biggest reasons why we’re down here playing to this day. We can’t lose that light.”

To some, Daniels might be a journeyman. To him, he’s more a renaissance man, with first-hand experience in organizations like the Rockets, Grizzlies and Lakers.

There’s value in learning how to adapt and survive in the NBA. Look around Denver’s roster, one that’s littered with second-round picks. It’s part of the Nuggets’ ethos. The Nuggets recognized it and appreciated his path. Not long ago, Daniels caught himself coaching rookie forward Tyler Cook, “a young cat” who spent most of the season in Cleveland’s organization. He told him to master one skill, prove his staying power in the NBA and then continue to refine his craft.

Daniels had a great relationship with James and watched closely how he carried himself. He saw his work ethic and the example he set knowing eyes were always on him.

“It kind of surprised me how I’m acting now with the Nuggets because, I’m not saying I never was like that, but it’s on another level to where (I saw LeBron’s) work ethic,” Daniels said. “It didn’t come with him walking up to me and explaining stuff. Everything was by example with LeBron.”

While the Nuggets stress their own continuity, Daniels is someone who brings corporate knowledge of the entire NBA. And when he buries a couple 3-pointers or lifts up a teammate in a down moment, don’t be surprised that the Nuggets found value in him. Castoffs are their favorite currency.