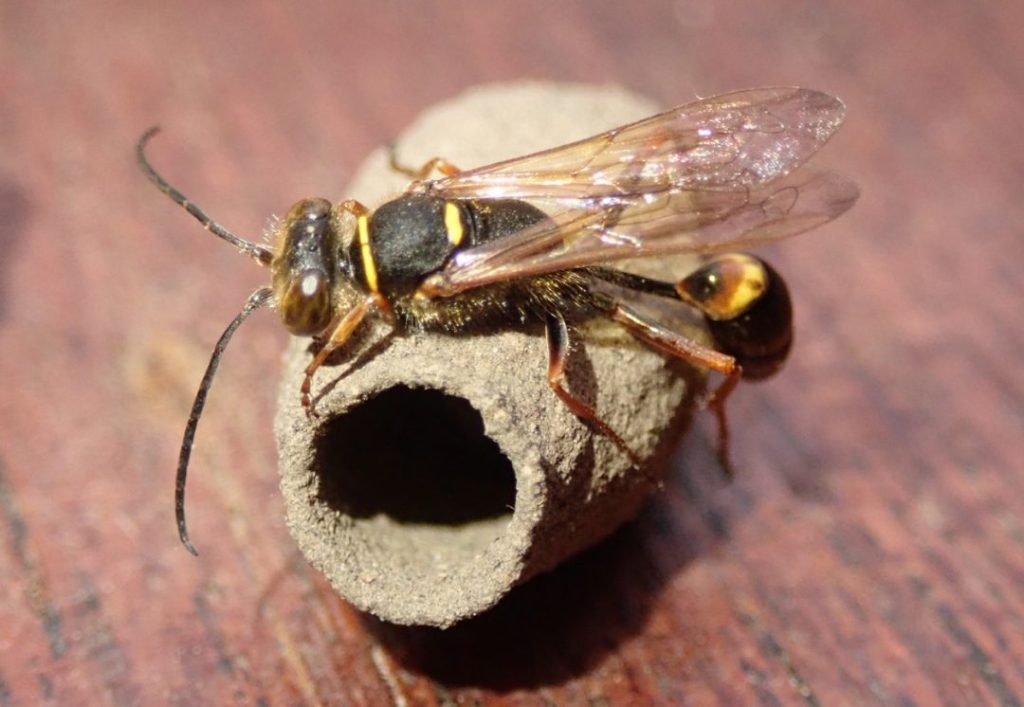 I take the darting and buzzing of flying insects in my garden almost for granted. I have a general idea of what is out there and what they are doing, and I am happy they are part of the summer landscape. The most recognizable ones like honeybees, bumblebees, ladybugs and butterflies are the easiest to spot, so are the common pests that wreak havoc on many of my favorite plants. But what about finding a new insect that hasn’t been part of the regular crowd of pollen seekers and plant chewers? It happened not too long ago in my garden, and here’s my story. First some background.

Colorado has the distinction of being the first state in the country to find and identify another non-native insect — the Asian mud dauber. When I found it, I had no idea it was a newbie to the state and America. Other non-native, plant-destroying pests like Japanese beetle and Emerald Ash borer first arrived in America from their native regions and then populated the eastern and mid-western parts of the United States before making it to Colorado.

The Asian mud dauber, which I first found in my landscape in 2016, is native to Asia, India, Pakistan and Nepal and since the 1970s has been established in parts of Europe and more recently Quebec, Ohio and Michigan. It is a hunting wasp, not at all like familiar social wasps we know — yellowjackets, paper wasps and hornets that build wasp colonies to raise their young.

Hunting wasps, including the Asian mud dauber, are like many other established hunting wasps in Colorado. They share the same behaviors where the female works alone to build solitary nests somewhere in the yard, under or above ground, near and on structures. After building the nest they search for specific insects to paralyze and return to their nest to feed to their developing larvae, also called grubs. Hunting wasps may look fearsome, yet they rarely sting — unless of course you try to catch one and hold it in your hand.

The Asian mud dauber (Sceliphron curvatum) was first found in Colorado in El Paso County in 2014 by Eric Eaton’s wife, Heidi. How exactly they arrived in Colorado is anyone’s guess — packing material, shared plant material or hitchhiking in a car? I am the second person to find them in Colorado and they are now in several counties.

Eric Eaton, a Colorado Springs resident and author of “The Kaufman Field Guide of North American Insects”, said that finding the Asian mud dauber was happenstance by his wife and that any gardener who wishes to “observe and record” insects in their garden could be the first to find something new. You simply need to be the first person, at the right time, in the right place, and have some curiosity.

The Asian mud dauber is a relative to the Colorado well-established black-and-yellow mud dauber (Sceliphron caementarium) and blue mud dauber (Chalybion californicum). All three can be up to an inch or more in length and share a similar body shape, very unmistakable if you see one. They have a narrow body plus an extremely thin petiole (waist) between the thorax and abdomen. Their names coincide with their coloring, except for the Asian mud dauber, which is dark, brown-black with brown-reddish legs and yellow or orange-yellow bands.

The females of all three types do the heavy lifting in making mud homes for their progeny. The differences between the three is where they make their nests (location, location, location) with some variations in construction methods. The blue mud dauber, the prettiest of the three, with her blue-black sheen, takes an easy path — she does not build new mud nests or cells, she seeks existing abandoned mud nests and takes them over. She is more of a renter than a builder. Another difference between the three is the type of insect each mud dauber targets to provision the nests — any backyard-sleuth entomologists out there might find this the most interesting habit of mud daubers. They seek out spiders as insect prey. Not just any spider, each type of mud dauber has their own special list of spiders to pursue.

Once the mud cells are built or found they hunt live spiders found outside around plants and other areas in the landscape. The female mud dauber knows just how to approach the spider she wants and when found gives it a paralyzing sting. The stunned spider, and many more that will fill up the cocoon nest, are brought back to await the final pièce de résistance from the female mud dauber. She lays one single egg on top of the mass of spider prey, for future sustenance once the egg grows to the next stage — a hungry larva, or grub.

Before flying off to start another build, the female mud dauber seals the cell with one last dab of mud. The developing larva will feed on the spiders until it pupates and emerges as an adult. This is the part where you want to know if the spiders are alive after being stung, hauled from their locale, given a helicopter ride followed by being stuffed and trapped in a mud structure only to be eaten by a developing grub. The short answer, yes.

If the Asian mud dauber is like the black-and-yellow mud dauber then it will produce a second generation in one summer. Late summer larvae will hold in place (diapause) in the cocoon until next summer when they will pupate and begin the cycle again.

The more common black-and-yellow mud dauber’s nests are more like mud condominiums with several cells built closely together, then mudded over for a consistent plaster look. These can be found under eaves, in corners of buildings, places that remain dry, so the condo is kept intact. Again, the blue mud dauber will fill her nests with spiders in stolen cells originally built by the black-and-yellow mud dauber and possibly the Asian mud dauber. Her favorite spiders to add to her mud queue are western widow and comb-footed spiders. She knows exactly how to lure them from their web or simply pluck them straight out.

Fast forward to our house in August 2016. While I was cleaning windows, I was surprised to find stacked (up and down) and consecutive (across the top) rows of cylindrical mud cocoons attached to the inner frame channels of our hinge-styled windows. I was expecting to find a dead gnat or two, not Asian mud daubers. I did some research for identification and reached out to a few people, but they were not confirmed as Asian mud daubers until 2018 by Whitney Cranshaw, Ph.D., an entomologist at CSU.

Next trip to Denver he stopped by to examine and dissect some of the cocoons and check out the type of spiders they most preferred as prey. He found jumping spiders, prowling and running crab spiders.

These types of spiders are found crawling around and on plants as opposed to web-building spiders.

Great, so now I know what these mud cells are in our windows, what’s next? Will they be back next year and the next? Will they make nests elsewhere on or near our house? Answers — yes, they’ll be back next year and the next; yes, they can find other hidden, often tucked away places to build nests. One year we found them in the garage on the underneath frame of our patio furniture. A friend of mine found some in her garden shed under a shelf.

The Asian mud dauber’s arrival to Colorado shouldn’t be a big deal, they are not displacing other common mud daubers and there are plenty of spiders to go around in landscapes.

Spiders are beneficial in their own right — eating earwigs, flies and mosquitoes. Asian mud daubers won’t harm us, however, their mud nests may leave remnants on surfaces when removed.

I guess I can’t blame them for tying to raise their family, but really, in our windows, every summer!?

Subscribe to our weekly newsletter, In The Know, to get entertainment news sent straight to your inbox.