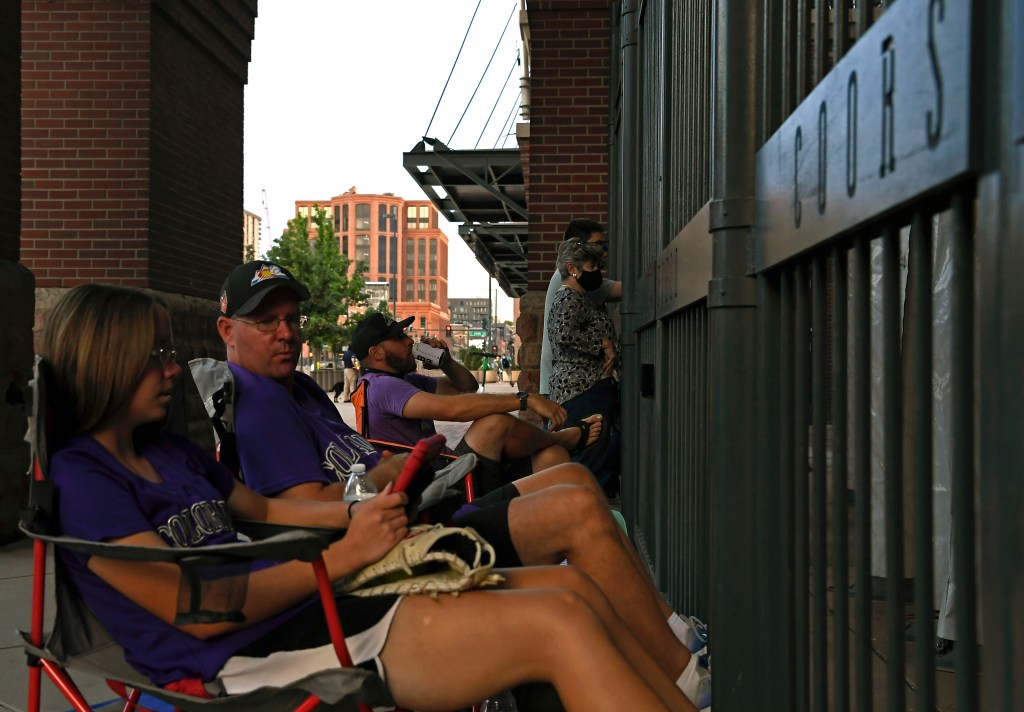 It was Luke’s idea. The Langleys were playing catch Friday in Commerce City, father and son, and 10-year-old Luke, having been promised by his father, Matt, for days that they’d visit the Rockies team store at Coors Field, figured it was time for the old man to pay up.

A promise is a promise. And opening day, even in 2020, is still opening day.

“What about today?” Luke pleaded. “It’s opening day, dad. We’ve got to get down there.”

Dad relented, which is how Luke and Matt Langley wound up watching batting practice about 90 minutes before the first official pitch was thrown at Coors Field.

Along Blake Street, stuck behind locked Gate C, it was more like hearing BP than, you know, actually watching it.

“You can see two outfielders out there, shagging balls,” Matt said. “You really can’t see a whole lot. But you can see some green. You can see just enough to make you go, ‘Oh, I want to be inside.’”

We all did, brother.

The 26th home opener at Coors Field was unlike any other. Eighty-five degrees at first pitch. Nary a snow flake in sight. No traffic blockades. No extra police. Ticket windows shuttered and silent, save for the paper signs taped up reminding passers-by that the offices were CLOSED BECAUSE OF THE CORONAVIRUS PANDEMIC.

Just the muffled cracks of the bat, coming from off in the distance.

“It’s better than nothing,” offered Cody Maschinot, who lives across the street from the ballpark, as he left the team store. “You’ve got to be happy that (games) are still happening.”

“You’ve got to make the most of it,” girlfriend Allec Brust added. “Because who knows?”

A pair of St. Louis Cardinals on Friday joined the line of COVID-19 positives, canceling the Redbirds’ scheduled contest in Milwaukee. The virus, having already played havoc with the National League East, keeps creeping, silently, ever closer.

The quiet in LoDo was what struck Maschinot and Brust initially. How surreal it was to walk home from the Rockies store — where they picked up a tiny jersey for Louie, their 3-month-old French bulldog — and not get hassled by scalpers along the way.

“I mean, it’s never a ghost town down here, even with COVID going on,” Maschinot said.

“Going to sit on the porch and see if we can hear anything and probably put the game on my computer and see if we can watch it and hear it at the same time,” Maschinot said. “It’s been a different experience.”

Friday was different for LoDo bars and restaurants, too, just not in a good way. This was the 25th opening day for the Sports Column on Blake, the 24th for general manager Kyle Hesseltine.

“This would be a Tuesday morning during the regular season,” Hesseltine mused from the ground floor of his popular — and now cavernous — watering hole. “I would do more in one hour (in 2019) than I probably will all night.”

Most of the tables sat empty an hour before first pitch, save for white Rockies koozies with the Coors Light logo on one side and the interlocking “C-R” on the other. Hesseltine ordered 1,000 from Coors a year ago. For opening day 2020, he capped it at 250.

Matt Langley’s trying to look on the bright side, too. After summers of total kids-being-kids disinterest, Luke caught the baseball bug last year at the age of 9, after Dad took the family to Yankee Stadium last July for a rare Rockies contest in the Bronx.

“It was just the atmosphere, actually getting to go through their little Hall of Fame,” Matt recalled. “And he came back and he dove into everything he could about the Rockies and Trevor (Story) and Nolan (Arenado).”

Luke: “And I became a Yankees fan.”

“Sort of,” Langley countered. “Still not allowing that.”

“I may become a Red Sox fan,” Luke said softly.

Three little words. Same as it ever was.